– As part of the repertoire of FLA debuted as an author with tango “Gil”.

– Between 1998 and 2000 I was part of the collective of cultural management Orquestra del Caos, with J. M. Berenguer and others, resident company in the Centre of Contemporary Culture of Barcelona, where we organized and prodcued events within the field of sound art, such as symposia enred-o: própia copia, 6th symposium of Electroacoustic music , November 1998, soundscape, 7th Symposium of Electroacoustic Music, November 1999, electric songs, 8th symposium of Electroacoustic music, December 2000. I also participated in the development of Sonoscope, an archive of sound art, and the 1999 and 2000 editions of the Sound Art Festival Zeppelin.
I created sound pieces for the pròpia-còpia (1998) and soundscapes (1999) symposiums, included in the compilations published for the occasion. I authored the soundscapes symposium interactive CD (1999). Participated in the creation and staging of the experimental piece-sound installation Sonic-Mem (2000), programmed on Max/MSP and semantic algorithms. 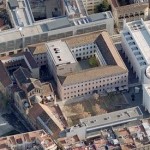 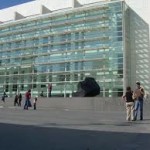